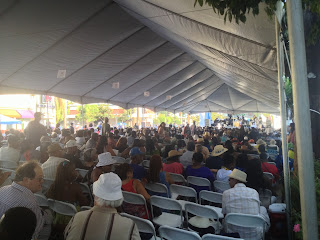 I have been tinkering with this idea of source.


When you are striped from your past removed from the source, mechanisms to make the real reasonable are distorted, reality keeps for the Other.  In the past few days I have been thinking about lineage.  at this moment I feel lineage is what helps memory retain the reason and the drive to move in the desired direction.

This weekend I attended the Central Avenue Jazz Festival.  There I witness lineage and connection.  Majority of the attendees were very aware of their lineage.  Locals that have lived through LA’s  segregation/ or separation that still leave noticeable divides in the land.

I try to comprehend what it feels like to be fenced into a certain sector of the geographical scape?  What kind of thoughts would you have if it was still hard to live in any other place?  What if they told you, you were wrong.  Wrong for thinking there was still such a thing as segregation.  What feelings would you be able to construct when White Reason (I find it twisted to use this faulty binary race code)  still does not explain your present condition.  In the while the Other imposes on your community.  If you can understand what it is to see the affiliated family you adhere to still being seen as alien natives, African Americans, what sentiment would you gain.  Here as long as any other non-native, yet acceptance only for the "positive" end of this two sided spectrum.

While walking around the festival, when I wasn't stuffing my face, I saw a community holding on to a genius culture but subjugated to self hate, which has attacked other communities as well.  Still I saw so much joy and love.  The music was enjoyable to every last note.  The caliber of musicianship brought to the doorsteps of community was too much for me to contain.  At this time in my age I find perfect joy in seeing others bask in spectrum's I only peek at.  A stare of the two.  Exchanges that only two felt shaping them as old memories and last favorites.  This community is rich with decades and elders, talent and unapologetic genius.  Roots are deep.  Lineage is strong.

Me, my name is as generic as josie j.  End trails of clustered culture attached behind me.  Too strange to forget the past, subtly remembering mine, actively constructing its future.  The un-anchoring both forced and sought.  I hope to find some lineage.  I might see how lineage finds its flower at the end of a long system of tendon-roots infinitely connected.

How connected?  Live in LA long enough and the roots will grab you by the leg.  Major Garcetti, old jr. high schoolmate Anthony Wilson (son of Gerald Wilson), played a surprisingly clean small piano solo, a bit shaky at first but pleasant. As I can attest to live a life time in LA and you would see yourself another character in this interconnected landscape. On this same day of July 25 2015, LA dedicated 42nd and Central Ave as Gerald Wilson Square.  Gerard Wilson of Shelby, Mississippi arrived here in 1940 because it was a place that welcomed and allowed him certain access.  The Dunbar hotel located on Central Ave. was the nicest hotel that welcomed black musicians.  Gerald Wilson remained in LA living a few steps from his community, historically rich Leimert park.  A jazz giant.  An artist uniting his community.  He lived with his wife Josefina Wilson, modestly.  Artists construct our reality we owe them for our sanity.  They all should live a bit above their choosing of comfort.  An Artist and a teacher Gerald Wilson was everything an artist aspires to be.  Influential, respected and remembered, a good man.

I walked along the festival streets and write this as an outsider, welcomed in a beautiful culture that I see myself a part of.  Born on foreign land removed from source. A different character connected to a lineage of colonization.  A crusade victorious in embedding its symbols and drives.  In this binary you can only fall on one side if you are heavy with color and conviction.