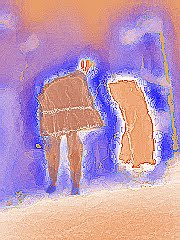 My hopes is to have the SoundWalk performance vid ready to share soon. I really enjoyed this piece and hope to experience it again, and give others a chance to do so with me. It was nice to be a part of the Soundwalk of Long Beach for the second time. Although it is bitter sweet.

I really do feel it is unfortunate it is a very little known event, mostly known to Long Beach locals, if even that. It is quite a unique event. Growth and positive spirit of audience and of the organizers is my desire.

One thing I found that was encouraging is the energy and spectrum of the audience. Most glad to see children and many of our community elders there and most ecstatic to see may colors and origins on many of the faces.

Art is strangled, sheltered in least terms, when hermetically sealed. Oxygen is for growth, your carbon, expelled, is just part of that cycle. You must breath on it, by all means break that air tight seal. Stir in all your germs all the filth, conjure up an elixir, strength is in the mix, to combat an pin hole panoramic view.

On a tangent now. Been thinking of that great white art box all artist love to put there finger prints on. So much white to reflect the light. To much space to contain the ego. 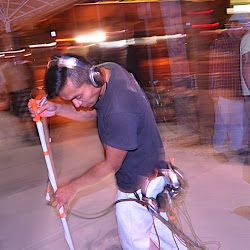 With hopes of transforming each molecule and atom of the Tarfest audience with waves of undulating, random and beaten sounds, this invocation delivered.

To tilt the unbalanced unconscious was the goal. Success measured in unveiling of error for tomorrow to be recalculated.

Thanks to ones that transformed into characters of weight, appreciation for the passive willing to absorb, acknowledgment for those active but not brought to light and special thanks to two extraordinary ladies (and one life stream in utero), willing testifiers, active and transformed.

One peculiar thing. Just before the performance music was turn on in the gallery, played through the p.a. system. By the end it fused with the noise of the performance and gave a nice texture.

This video and sound objects were presented the remaining days of the show.

Wooden form functions as a resonator feedbacking onto itself to produce a wave of undulating texture. Headpiece has a pitch bended analog synth. Piece was and exploration in control symbolism and recontextualization them.

DivineBrick Research Projects Is not a group but an idea. Because of this there is always a flux in performers and artist. It is a privilege to work with a multi spectral group of folks.
I am happy to confirm, for the Tar Fest Two guest performers Vishal Goklani and electronic emergency.
-DBL
No comments:
Email ThisBlogThis!Share to TwitterShare to FacebookShare to Pinterest
Labels: performance, Roman Æon, tarfest, vishal goklani 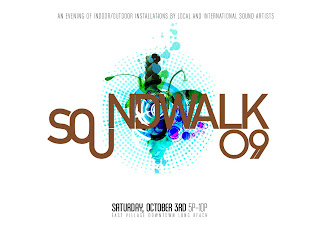 It's that time of the year. Time for the annual Long Beach SoundWalk. It is quite remarkable that the only sound walk I know about in Southern California is in Long Beach. Well I am honored and glad to be part of it for a second year. This Year there will be another performance to experience. I will not bore you with the details.

If anything come to experience a night walk filled with many audible happenings around a usually not so contemporaneously experimental Visual arts neighborhood. Leave it to Long Beach To add the Noise to the Contemporary art scene. That is one thing I do feel it has going for it, the music Scene, always very attainable and affordable. 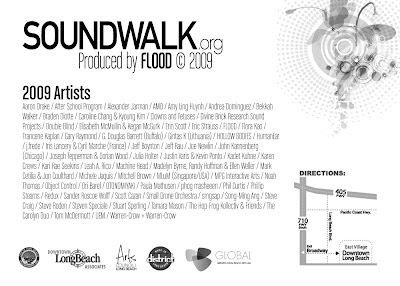 Come to the only SoundWalk (that I know of) in Southern California . There will be many sound works to absorb.

On September 25th DivineBrick Research Sound Projects will have an opportunity to perform at this years Tar Fest reception. The performance will take place at the Korean Cultural Center at 5505 Wilshire Blvd 6p-10p. This is opening night after that the work and a video of the performance will be on display.
In honestly I do not know much of the Tar Fest. It appears it has been occurring since 2003. For more info visit the Tar Fest site here.
It is quite exciting not knowing what to expect of the audience or of the work. This performance has been slowing developing and is at an advance state of transmutation. There is still a lot to learn but it seems all is leading towards a reactionary illuminated state. Or that is the hopes. There will also be a guest performer, a Vishnu channeling, great art peer and contemporary, Vishal Goklani.
The hope is also to have a lot of fun with this one and take it to the next level of hilariously profound absurdity that opens ones eyes and makes one aware of all the strings that pull on ones belief's. So humor us and join us on a eagle trip though a landscape of noisy oceans, fascist peaks, Alchemical rivers of information lies, reflecting pools of self hate, and along the way rest stops of WTF.

There are two performances that are occurring in the next couple of months. If all goes well and if you would delight in being present you will be able to see some performance works.
What you will have a chance to experience is a sweeping performance and a muli-media performance. Both have a sound component to them. Hopeful they will be a rich layering of artist contributions.
One of the performances will occur on September 25, 2009 at the Tar Fest in Los Angeles and another on October 3, 2009 at the SoundWalk of Long Beach.
More details once things are set.
No comments:
Email ThisBlogThis!Share to TwitterShare to FacebookShare to Pinterest

Some Words on Creation By DBL

No comments:
Email ThisBlogThis!Share to TwitterShare to FacebookShare to Pinterest

KCET will be re-airing the Visiting With Huell Howser, in which he visits Long Beach's Soundwalk, on January 23 at 7:30 pm and 12:30 am. The interview we got was ok considering it was impromptu, early in the many performances we did, levels off and all but fun none the less. I knew what to expect knowing his interview style and wholesomeness so I really did not know what to say, plus I could not hear much and was in no state to do an interview. I wish they would of had footage of the later performances. We settled in, levels, rhythm and the people really started to feel it...especially me. Unfortunately very little sound and video footage exist of this piece and is now shattered. Although is is hard to really record the really sub bass sounds that make the piece.
No comments:
Email ThisBlogThis!Share to TwitterShare to FacebookShare to Pinterest
Labels: huell howser, kcet, Long Beach Soundwalk, performance
Newer Posts Older Posts Home
Subscribe to: Posts (Atom)