The Sun Bear (three legs and a rail) ep4

I have been seeking a way, a form, a complete practice in which to exercise actions and thoughts that coincide with larger actions and thoughts that would allow behavioral growth.  Understanding the mechanics and behaviors of this growth was also of interest.  I seek a way to understand while I am actively changing the space in a way single to me, but part of a universal whole in which I am trying to understand.  Causing shifts which rearrange enough to comprehend anew, but not losing the string that pulls me to the center.  This is my present lesson. That seems the most human to me or the human I seek to be.  A searcher of unknowable truths.  A believer in forgotten mistakes.

Destruction is just a small aspect of rebuilding.  When rebuilding, my mind thinks, this is when drive must be channeled. Fire does not need direction, everywhere is its path.

The most literal understanding of what I mean when I say all those vague concepts I chirp all the time, my only straight forward and simple representation and lesson is my work bench.  Beauty do to function and simplicity.  Growth enabled by necessity and a giants fall.


I needed a bench to work on.  I had the wood.  The know how I fumbled through.  Each mistake reset with the only skill I did have, the only one we all have, to ride the wave on which we travel skirting on the right angle just enough to continue forward, finding aesthetics in falling upward a spiral step.  To move is chaos. To have continuous movement seems to be the harder drive, the more deliberate tendency.

This work bench maybe a certain kind of perpetual.  Either perpetually in my life time or the Sun Bears.


My Bench is up to working condition but let me show you how I re-arrived there.  The last I spoke of the Sun Bear I was speaking of the maple plug planed and ready for the next lamination.  Since I cut off the old tenons of the third leg I was left with less material for the tail of the sliding dovetail.  The dovetail that would replace the failed fox joint that originally held the third leg in place. The walnut addition allow me to have the material to make the socket and tail of the sliding dovetail and hit my target height.  It's an ad-hoc aesthetic that I found both silly and harshly contrasting.  Which I enjoy.

Figuring the height was a bit forgiving.  If my measurements of this moving bench were off I would simply have to flatten out the top to correct the angle that would be off.  Of course even though this top has moved drastically it at one point started true.  This is still prevalent in the left side of the bench.   The area between the two twin dovetails of the first two legs were pretty square, some movement.  Those were the strongest of the joints in the work bench.  From there it went from bad to worse...but more about that in the next post.  Saving me a noodle ache when flatting the top I made sure my estimates were true.

I glued it in the same multi-step method as the maple. 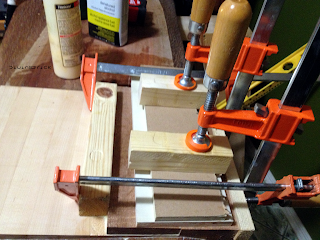 When all the smoothing was done the beauty of the walnut really revealed itself.  It has a gorgeous curl in the grain.  Can't remember where this walnut came from.  Possibly arts school.  My feet have a great view of it when I work.  That's if they look up.


Most often the table saw is a highly accurate tool, only if your reference for the cut starts from a square point.

The portions of the third leg that were once square were: the foot, the potion of the slab (slab dims 2 x 16 3/8 x 27 1/4h in.) that enters the foot (foot dims 23 x 3.5x 3.5h in.), the portion of the slab that enters the top of the bench.  As I did when I first built the bench I picked a squarish side, made it more square, then made everything in the general proximity of the parts that would be riding on the table saw square.  Square from there, opposite side as well.

I did a survey of all the planes and angles of the legs and top and figured which way to fudge and how much.  A very intuitive approach.  Once I made sure the sides of the leg were parallel I finished removing the remaining buds that were the failed fox joint tenons.  The narrow side remained with the natural edge.  Setting the saw to an angle I decided...I just went on how much I needed to angle based on the density and brittleness of the wood (to much of an angle I risk failure on the pointy parts of the dovetail), then I went ahead and made the first pair of cuts down the length riding on the narrow side at the top.


I honestly don't remember what I used to cut the length of the cut.  I think I chiseled some of it then cut the rest with my hand saw.  You can see it in the picture. 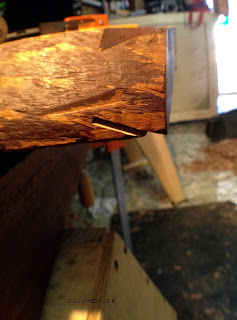 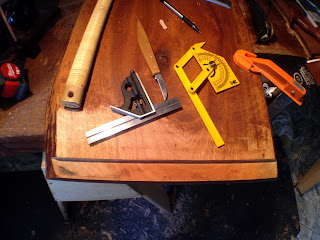 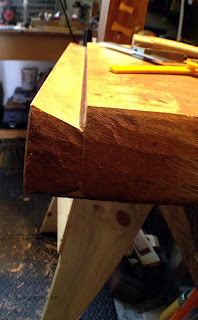 At certain points in my general making, I still seem to hit mental blockade.  A now too uncomfortably familiar paralyzing unwelcomed friend.  I sometimes think it is a natural instinct to protect the self.  Or maybe it's a crossed wire on a feedback loop.

For me, my personal experience, my demise waits patiently behind hesitation.  The only problem in knowing this is knowing how to temper my willingness to jump.  This willingness has pushed my psyche, my flesh self, my general growth.  I realize this has also cause unwanted effect.  One example is this next step.

I thoroughly measured this next cut.  The groove for the sliding dovetail.  I decided to use a circular saw to help me make the recess.  My first cut went perfect. down the center.  Stopping short of going through the whole of the newly replaced underside of the bench (I thought it would look neat if the third leg looked like it got shot out and embedded into the top). The second one was just as well, angle true.

The other side of the angled groove, this cut is where I saw myself going out of the marked line.  I had a chance to stop.  I just continued.  I'm not sure if I continued out of impatience or just for the challenge to fix another mistake.  Even though the whole time it felt purposeful, I regretted the cut as soon as I ended it.

This inconvenience left me with a slightly wide groove towards the stop in the cut.  A stopped reverse tapered sliding dovetail.


Guess by this time I was too preoccupied with measuring to take more pictures.

I chopped the rest of the groove and cleaned it out with the chisel. 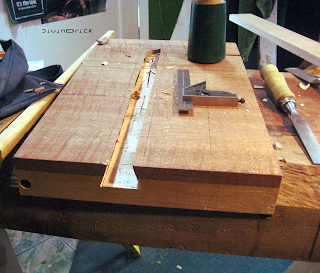 The fit was good enough to require a couple of shims. 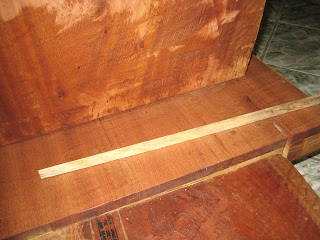 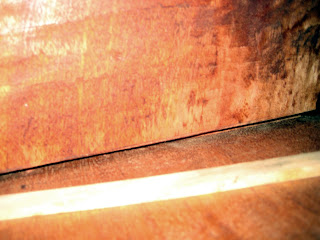 To not forget this mistake I made sure I could see those shims.

Setting these shims was the last step to make the Sun Bear able to stand. 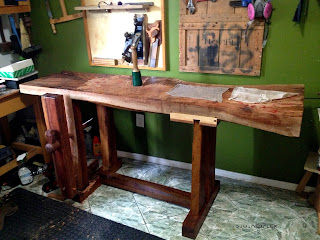 After forcing a few more shims here and there to really lock in the legs (these were tiny compared to the other ones) I was content to start the flatting of the bench.

I remember when I last thought of retrofitting this failed fox joint.  A blue moon ago I started the work.  Because of lack of equipment, interest in other arts, and the influence of corporate work that lots of artist feel must me done to be feed, this project had been in slumber.  In need of making is the catalyst that revived it.

Next post on the Sun Bear will be about it's flatting and clamping additions.