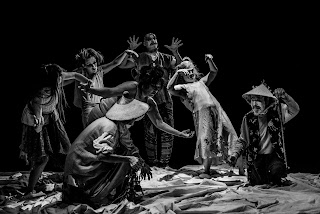 The Harupin-Ha Dance Theater will be coming to Los Angeles September 15-16, Oct. 6-7, and Nov.3-4 to share their holistic style of Ankoku-Butoh.

Techniques transcend beyond the dance studio and stage. From daily maintenance, core work, and internal imagery, techniques become useful in daily life and provide a foundation for life long learning and growth. These workshop will culminate with a performance in December.

This is the first of the workshops. Feel free to invite anyone to this that you feel might be interested. It is truly a rare event to have butoh masters Koichi and Hiroko Tamano in LA.

Koichi and Hiroko Tamano were among the very first to perform Ankoku Butoh, which translates literally to “the dance of darkness.” The genre emerged in the late 1950s in post-atomic bomb Japan. It was created by two dancers, Kazuo Ohno and Tatsumi Hijikata, who sought to create a new, uniquely Japanese form of expression that completely rebelled against the Establishment, and both Eastern tradition and Western styles. Koichi joined Hijikata’s dance company in 1960, as did Hiroko a few years later. Hijikata encrouaged the Tamanos to introduce Butoh to the United States. The Tamano’s performance in the 1976 “Japan Now” exhibition at SFMOMA was the first Butoh seen by an American audience and made a big sensation. The Tamanos moved their dance company Harupin-Ha from Tokyo to Berkeley, California in 1979 with the blessings and encouragement of their teacher. For decades the Tamanos lead dance workshops in Berkeley and also operated the restaurants, Country Station and Tamasei, which served as meeting places for the dance and theater communities of the Bay Area. They are known for their holistic approach to the art of Butoh. The Mayor of the City of Berkeley, California declared March 28th, 2017 to be the “Koichi and Hiroko Tamano Day.”